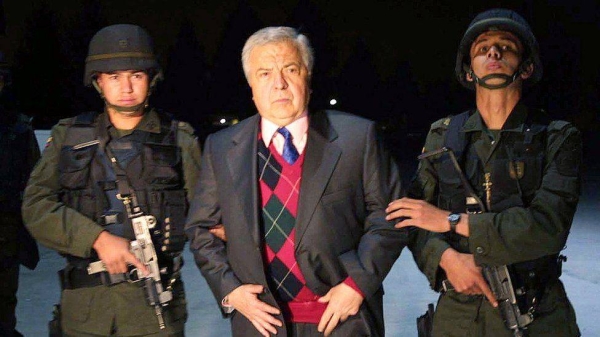 RALEIGH, North Carolina — The former leader of the once powerful Colombian Cali drug cartel has died in prison in the United States.

At one time, Gilberto Rodríguez Orejuela controlled the vast majority of the world’s cocaine trade and was a sworn enemy of Pablo Escobar.

The 83-year-old has even been dubbed the Chess Player for his skill in staying one step ahead of his rivals and the law.

But in 1995 his luck changed – he was arrested in Colombia and eventually extradited to the United States in 2004.

The former cartel leader was serving a 30-year federal prison sentence in North Carolina, where his family says he died of illness on Tuesday.

At the height of his powers, Gilberto Rodríguez Orejuela ran the Cali drug cartel with his brother Miguel.

According to the US Drug Enforcement Administration (DEA), the couple’s Cali gang was responsible for 80% of the total global cocaine trade in the mid-1990s.

This monopoly was not achieved until after 1993, the year Rodríguez Orejuela’s longtime nemesis – Pablo Escobar, the leader of the Medellin Cartel – was killed by the police.

While Escobar’s Cali gang had a fearsome reputation in Colombia for violence, the Rodríguez Orejuela brothers tried to portray themselves as respectable businessmen.

They later admitted to using bribes to gain friendly treatment from powerful politicians, to whom they were mostly close, and were never pursued as actively by the authorities as their Medellín rivals. .

Rodríguez Orejuela even preferred to describe himself as an “honest pharmacy mogul” – a reference to the family-owned pharmacy chain.

But in practice, the Cali Cartel was ruthlessly violent. For years, its members have fought with rivals in Medellín for control of lucrative cocaine markets and supply routes.

The Rodríguez Orejuela brothers deployed bombs and vigilantes – and are believed to be behind the Pepes group responsible for the deaths of more than 60 relatives and associates of Pablo Escobar.

Hundreds of gang members, drug dealers and ordinary people were killed in the bloody turf dispute that gripped Colombia throughout the 1980s.

The Cali Cartel’s demise finally began in 1995, when police arrested Gilberto Rodríguez Orejuela at his luxury home in Cali, where he was allegedly crouched in a wardrobe.

Within a year of his arrest, six of the cartel’s seven leaders were either dead or behind bars.

His younger brother Miguel, arrested two months after Gilberto, is currently serving a prison sentence in the United States. —BBC