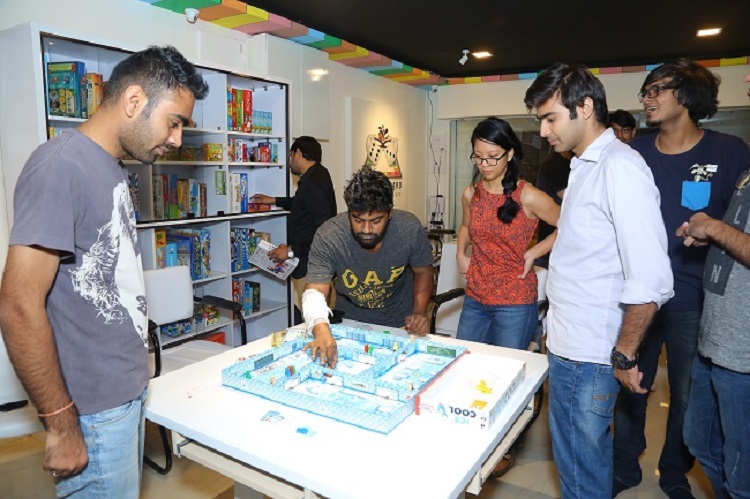 From Scrabble to the Abyss, you can play 700 board games at this Hyderabad cafe

The cafe has gaming gurus who explain the games from scratch and allow your party to play all day for the price of Rs 299 per person.

When was the last time you dusted off your old Snakes and Ladders board and played a game with your family before bed? Whispering slow prayers not to end up in the mouth of the snake waiting for you a block from the winning mark? Crying scandal for manipulated dice throws, bickering and making mistakes by jumping on the boxes?

If you still cherish your Ludo and Monopoly boards rather than scratching your smartphone screens cutting virtual fruits, this new board game cafe in Hyderabad, which is said to be India’s biggest, will be your new adda.

Located in a rather low-key location in Jubilee Hills, Get On Board Cafe has been around for about 6 months and allows you and your team to have fun with board games. But if you still cherish your good ol ‘Ludo or Snakes and Ladders, this board game cafe definitely has something new in store for you.

The cafe is home to over 700 board games, the majority of which come from the personal collection of its owners, Sireesha and Bhujang. You can choose, strategize, and laugh about games, which you might not have heard of until now. From popular games like Scrabble and Monopoly (themed Game of Thrones) to award-winning games like Ticket to Ride, as well as the world’s smallest and biggest board games, they’ve got it all.

Cleopatra, Abyss, Five Tribes, Keltis, Montego Bay, Codenames, and Puerto Rico are some of the board games that might make the Snakes and Ladders generation slightly uncomfortable, but don’t worry. This cafe doesn’t let you learn the game on your own. They have gaming gurus who explain the game from scratch and allow your party to play all day for the price of Rs 299 per person.

Speaking to TNM, owner Sireesha Behara said about 650 of the 700 board games available in the cafe are in the couple’s personal collection. â€œThese games were collected over a 15-year period that we spent in the United States and France. Due to the extreme weather conditions, we started stacking our board game shelves to kill time. And in 15 years, we had a playroom where we spent our Saturdays and Sundays with our friends who had become board game freaks like us.

Sireesha says the cafe games are organized in increasing difficulty levels, on six different shelves. â€œThere are six levels in which we have categorized the games. Whenever a group arrives, we try to gauge their level of interest and suggest some of the most basic games called â€œescape gamesâ€.

Escape games are like icebreakers that help set the mood. Some of the popular games in the category include Lost Vegas, Sequence, Dragonwood, and For Sale. Sireesha and Bhujang are masters in the art of playing the 700 games available in the cafe, from the smallest board game in the world, Sly, to the largest one called The Market of Alturien.

â€œThe next three levels are categorized into light strategy, medium strategy, and heavy strategy games. By the time one reaches the heavy strategy category, they would not need any game guru to explain the game. The players become efficient enough to guide themselves through the game using the rules. Captain Sonar, Catan, Abyss, and Small World are some of the most popular games. There are over a hundred games in the cafe that people haven’t got their hands on yet, â€Sireesha adds.

The fifth category is called skill games. These games require extensive hand movement and the sharpness of your five senses. â€œGames like Rings Up and Jungle Speed â€‹â€‹require coordinating hand movements with your five senses of the mortar. These are games where you can hone your balancing skills and may require you to pull gears and totems, â€says Sireesha.

The sixth category includes games that make your brain work. These are mostly games related to IQ and words like Scrabble, Puerto Rico, or Pandemic.

The cafe has 10 tables and soft cushions spread across the floor for playing larger board games, where you can also have cat parties, birthdays, and reunions. Plus, Get On Board is the only place where you can find all 15 versions of the award-winning Ticket to Ride game under one roof.

â€œA cafe exclusively for board games was Bhujang’s brain child. Although we were initially skeptical of its success, within 30 days people started flooding the cafe to such an extent that we are running the cafe 365 days now without any interruptions. People have become so addicted to games here that many of them even cancel their movie and pub outings and keep playing until 11 at night, â€Sireesha said.

Bhujang is an IT professional while Sireesha worked as an IQ booster in France. The couple are now planning to open another board game cafe in Jubilee Hills, which would be the world’s first rooftop cafe.

â€œWe run stress relief programs in IT companies and have also launched the portable Get On Board service where game gurus come to your home to teach groups of over 10 members. These games have become so popular that we are now receiving orders to host gaming events at sangeets and chaadis too, â€Sireesha laughs.

Chess: Russia opts for unconventional methods in the hunt for the best grandmasters | Chess