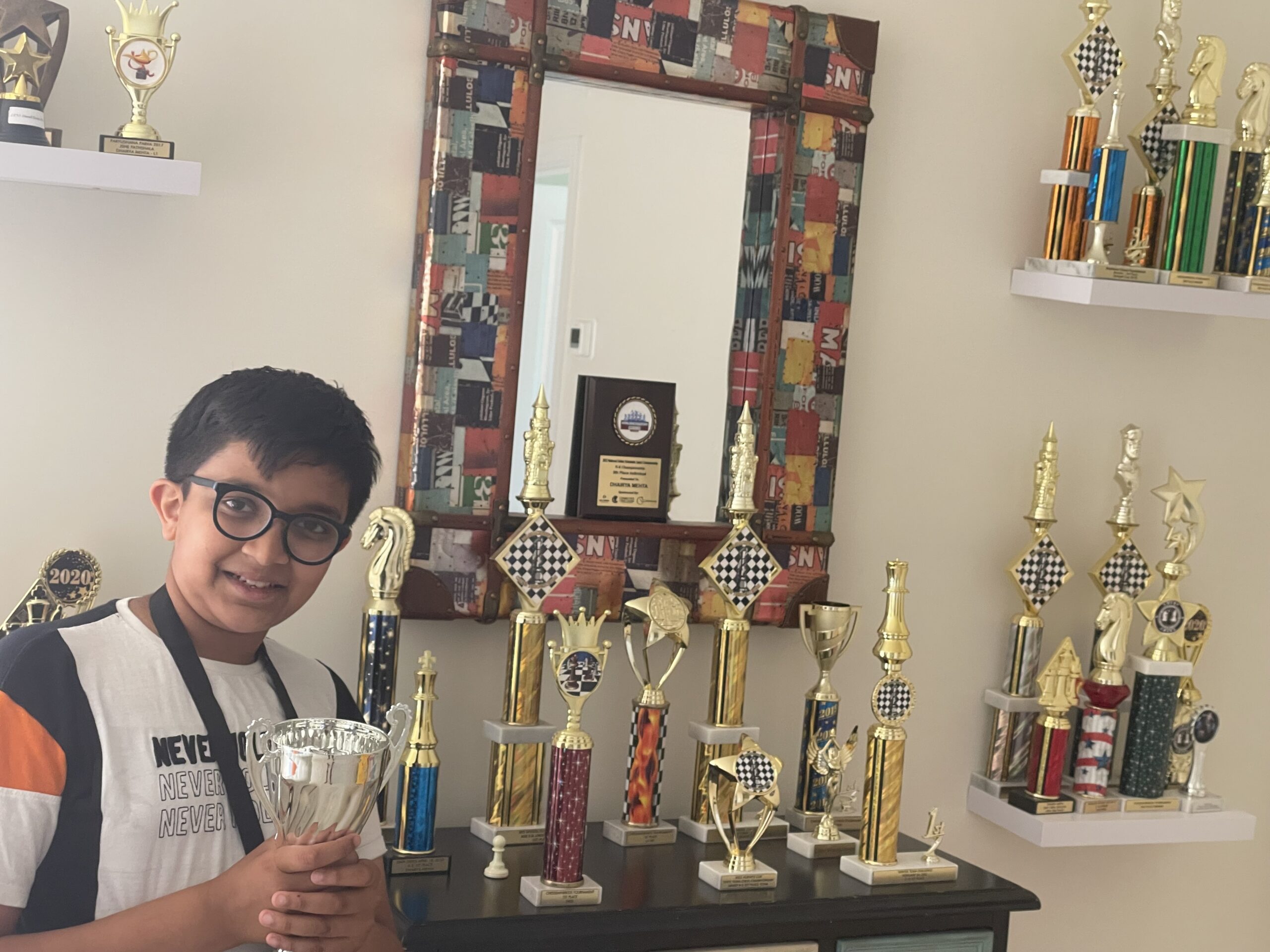 Fifth grader Dhairya Mehta, who has been playing chess tournaments since he was in kindergarten, recently finished second in a state tournament.

On his fifth birthday, Dhairya Mehta received a chessboard. The box remained closed in his house for months. Bored one day, Mehta asked his father, Mitul, to teach him how to play. His father showed him the basics and then enrolled the boy in chess lessons.

At age 6, Mehta was encouraged by his instructor to enter a tournament.

“We just showed up there and we weren’t expecting anything,” his father said. “His coach said he only knew the basic rules.”

To everyone’s surprise, he finished in third place.

Although he is only a fifth grade student at Hopkins School, Mehta has already participated in more than 114 chess tournaments. He finished first, second or third in most of them. The large collection of trophies and medals in his home testifies to this.

“For me, practicing means playing chess, of course, watching chess videos on YouTube and analyzing my game to study my mistakes,” he said.

“The first game I was destroyed,” Mehta recalled. “I didn’t feel well, but I spoke to my father and he gave me confidence.”

He won the second and third games and drew the fourth.

At local tournaments, Mehta often sees and faces the same faces. Over the years, some of the contestants have become friends and played friendly matches against each other.

“By continuing to play, I have been steadily improving throughout the pandemic,” he said. “After the pandemic, I played much better than before.”

Her father added: “Because of the pandemic, [kids] started playing every day. There was a lot of training, and when the pandemic ended there was a big jump in a lot of kids because they were training so much.

Mehta still plays in some online tournaments, and at the 2022 Online National Rapid Scholastic Championships, he placed ninth in the K-6 division.

Although he loves chess, Mehta does not aspire to be a chess grandmaster like his idol, Viswanathan Anand, India’s first chess grandmaster. Instead, he hopes to be an entrepreneur and run his own business. After a summer break, encouraged by her parents, Mehta plans to play more chess.

His passion and commitment to chess inspires his younger brother and other students at his school. His brother, Viaan, started participating and winning a few chess tournaments. At Hopkins, Mehta is the assistant coach of Chess Wizards, an after-school program, and one of his favorite activities is creating chess puzzles for others to solve.

In addition to chess, Mehta plays baseball and the violin, and he enjoys playing Monopoly and cards with his family, especially since he can no longer play chess with his father.

“I try to avoid this humiliation,” his father joked. “After the first few months, I realized he had passed me.”

Play Scrabble in the Thunderdome