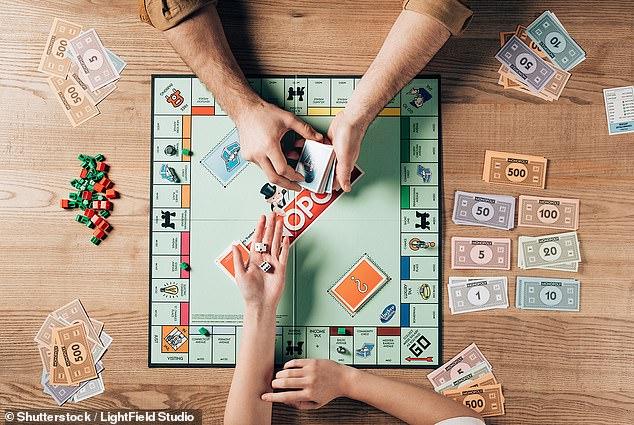 Just too risky! Nearly half of American families have BANNED Monopoly from their game nights due to fights over cheaters and sore losers

By Adam Manno for Dailymail.Com

Nearly half of American families have banned Monopoly from their game nights to prevent the fun from turning into a fight.

That’s according to a recent OnePoll survey, which found that one in five people have put away a board game at home after suffering too many fights and sore losers.

Most banned of all is Hasbro’s Monopoly, whose metallic battleships and top hats were shelved by 44% of survey respondents.

Monopoly leads the pack for banned games, with 44% of people having to take a game out of rotation choosing the iconic Hasbro real estate game (file photo)

TOP 5 MOST FORBIDDEN BOARD GAMES

OnePoll conducted the survey of 2,000 people for Z-Man Games, best known for its collaborative board game Pandemic.

Twenty percent of respondents said their game nights are “often or always” disrupted by competitive or hostile behavior.

The most common outbursts include someone quitting because they’re losing (46%), someone accusing another player of cheating (44%), and two or more players arguing (44%).

Thirteen percent of people admit that they are the problem “most” or “every time”.

“Competition brings out the best in some people but the worst in others,” said Justin Kemppainen, director of brand management at Z-Man Games. “It can manifest in small ways, like low-level grunts and sulks while playing, but it can explode into shouting and fighting, which can ruin a gaming experience.”

This was the case for 11% of respondents, who said they had witnessed a physical fight.

A recent OnePoll survey found that one in five people put away a board game at home after suffering too many fights and sore losers.

“Being on the same team and battling a common enemy in cooperative play can create a sense of shared triumph in victory or shared grief in loss,” Kemppainen said. “Better yet, all negative emotions are directed at inanimate cardboard rather than at people!”

Nearly half of baby boomers prefer to play one-on-one, while Gen Zers are much more likely to prefer working in teams (38%).

Community chess: Garry Kasparov on his transition to social play