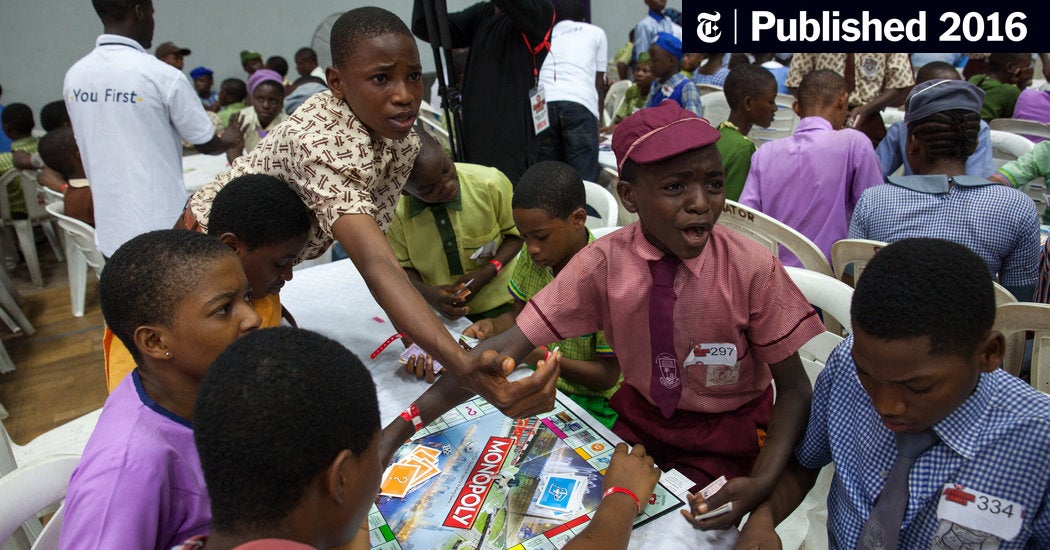 LAGOS, Nigeria – Time is running out at the Lagos Under-17 Monopoly Championship, and the pace of the game was getting so hectic that it was difficult to decipher the true owner of Banana Island, Tiamiyu Savage Street and other properties on the tray.

“I am the owner of this house! shouted Ibrahim Mubarak, 14, a student at Isale Eko High School, his finger hitting the property on the board.

But just after Ibrahim received his rent, time was up: Africa’s biggest city’s biggest Monopoly tournament was over.

Crumpled and weathered Monopoly money was strewn across 153 wobbly tables in the sweltering gymnasium, where more than 1,200 students huddled for an hour around Lagos-based game boards. A champion was declared, only to be usurped moments later by organizers who had made a mistake and forgotten another competitor.

“The key to winning is just having determination,” said Elizabeth Braimoh, 13, the official winner and a student at Topfield College.

Nigerians love board games. Chess and ayo, a game similar to mancala, are popular here. And the nation’s Scrabble prowess went global this year when a Nigerian player Wellington Jighere won the world championship.

But playing Monopoly is appealing for another reason: it mimics the chaos of the real estate market in Lagos. Buying property is a complicated business, rife with bribes, scams, and even machete-wielding gangsters.

“It is a true reflection of what is happening on the ground in Lagos,” said Tarba Fatai Oladele, physical education teacher at Ipakodo Senior Grammar School.

The monopoly started to take off about four years ago here, when Lagos got its own version of the game. The new board replaced American gaming staples, like Park Place and Boardwalk, with local properties like Bourdillon Road, a street in the Ikoyi district lined with luxury apartments, and Agege, an area near the main airport that houses affordable government. Real estate project.

In August, the Lagos State Sports Commission designated monopoly as an officially recognized sport. Officials quickly organized the tournament in late September, hoping to break a world record for the number of competitors playing the game simultaneously – 605 people at Universal Studios in Singapore in March, according to Guinness World Records. The Lagos event has been submitted to Guinness for verification.

The committee hopes to organize more tournaments, with the added objective of teaching children strategies for saving money and making good investments.

“Real estate is an asset class that everyone should aspire to,” said Nimi Akinkugbe, managing director of Bestman Games, which distributes the Lagos version of Monopoly and helped organize the tournament.

Yet outside the gym, in the sprawling, sprawling streets of Lagos, today’s real estate market rivals the chaos of 1,200 boisterous teens swinging tables and shouting, “Pay, pay, pay!

Nigerians, like many people around the world, dream of owning property. In a country that has one of the continent’s largest economies and boasts of a burgeoning middle class, the essentials of real estate ownership should seem close at hand.

But the country is going through a recession. Inflation is at levels not seen in 11 years. Interest rates are so high that most home loans are unaffordable for average home buyers.

The real estate market operates under a system of cautious buyers prominent throughout the metropolis, where spray-painted signs on many houses shout warnings: “This house is not for sale.” The posts attempt to thwart a long-standing scam game in which crooks sell homes they don’t actually own to unsuspecting buyers.

Buyers must also navigate corruption, even at official levels. Officials have long asked for bribes in order to obtain the official documents needed to purchase a property.

Even once an agreement is made, problems arise. Armed with machetes, criminal gangs so well established that they have a name, omo onile, roam the construction sites of Lagos seeking to extort money before allowing construction to begin.

Also, the government makes liberal use of the eminent domain, regularly seizing property, sometimes with extreme consequences. This month, nearly 33,000 people were evicted from a seaside community on the outskirts of Lekki in Lagos.

Authorities razed part of a slum near the city’s main port in 2013, forcing 9,000 people to leave their homes. The year before, the state had cleaned up part of Makoko, a waterfront slum, which appears on Lagos’ version of Monopoly as the cheapest property.

The Nigerian court system offers little relief from scams and foreclosures; the registers are so cluttered that land disputes take years to settle. The applicants’ homes in Lagos are sometimes razed to the ground before judgments are handed down.

Matthew Ottah, one of Lagos’ top property rights attorneys specializing in land scam detection, estimated that this year alone he has investigated over 200 deals for clients wishing to buy property and found less a quarter of them legitimate.

“There is one story or another that prevents us from approving it,” said Mr Ottah, adding that he sometimes receives calls from members of omo onile gangs who threaten his life.

Mr. Ottah himself has been the victim of a land scam in the past, losing the equivalent of about $ 25,000 after handing over money for real estate from a seller who turned out to be a fraudster.

During the Monopoly tournament, the random nature of actual real estate transactions was lost on the students who focused on the top prize, which came in at around $ 2,000. Playing the board game was quite chaotic.

Players only had an hour to collect as many goods as they could. The game grew sharper as the minutes passed, with students rolling the dice so quickly that teachers and state officials who acted as volunteer bankers struggled to keep up.

“Quick, quick, give me two naira,” one student asked another who had landed on his property. (Naira is the local currency.)

For most students, a strategy emerged: hoarding.

“On this table, complained Adeleke Olayinka Bello, a student at St. Jude, a private school, no one wanted to sell their property.

Organizers called on students to negotiate with each other, a staple ability in Nigeria’s bargaining-centric economy.

With two houses on each property and seven other players orbiting the board, Elizabeth sat down and saw her fortune grow to over 17,000 naira.

Scrabble yn Gymraeg: the board game that nobody wants to buy | Board games