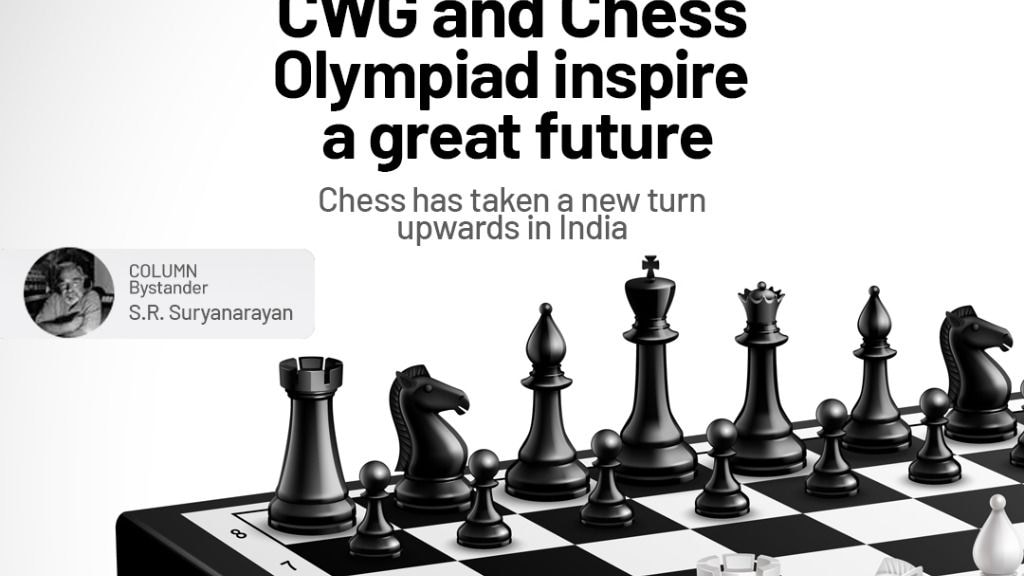 India shines. These two words best describe the touch of euphoria that swept the country after the Commonwealth Games in Birmingham and the Chess Olympiad in Mamallapuram, near Chennai. India has not swept the medals as such, but our sportsmen have done enough to instil joy, hope and belief that the future is brighter for the sport in the country. And these thoughts could not have come at a more opportune time than when the country has just touched its 75th year of independence.

Time has passed and aspirations have reached inspiring levels. Take chess for example. A sport that is believed to have originated in India but has developed and flourished in other parts of the globe. But, since the rise of Viswanathan Anand, chess has taken a new upward turn in India. Then came the opportunity for India to host one of the greatest chess competitions, the Olympiad, again inspired by Anand and supported by the government of Tamil Nadu. With two bronze medals in the team events, including a historic first for the women, in addition to a host of medals including two golds in the individual section, the event overall gave a new insight into the strength of India in this mental sport.

Just as Anand’s greatness became a family story when the great Indian played his world championship match in India, the Chess Olympiad gave first-hand testimony of India’s rich talent to fans of the country. Like Anand, the five-time world champion himself said what pleased him most was how the young players responded to challenges. His attention was particularly focused on D. Gukesh, one of the youngest GMs in the sport. He was the greatest achievement of this Olympiad, even though he praised others for this commendable effort. What will be eagerly awaited from here is not whether Indian chess standards will go higher. It certainly will, as this is how young chess players grow in the country, and with more and more Indian players breaking the ELO 2700 barrier (India currently has seven in this club of elite), the signs are even more promising. More tournaments are needed to keep interest high and that will be key. With Anand now vice president of the global body, he will surely do his part to ensure that the good news actually multiplies in the times to come. Chess couldn’t have hoped for better times!

The state of other sporting disciplines is largely in the same mold. One of the biggest impacts of the Tokyo Olympics was Neeraj Chopra, the star javelin thrower. His gold medal triumph was literally a revelation that the Indians can perform at this high level. From just taking part which was the norm with an exception or two, to winning the medal is a huge step forward, but it has been a hindrance for most.

Certainly the shot provided the first signal with Abhinav Bindra winning Olympic gold at the 2008 Games in Beijing and heralding a new era for the sport. Filming has since seen top-notch performances. In fact, it was feared that the lack of a shot at the Birmingham CWG would affect India’s overall medal tally, but what finally happened was a revelation thanks to a transformation that promises to become a new chapter in the history of Indian sporting achievements. In short, Birmingham has witnessed an assortment of successes ranging from athletics to bowls. Imagine an Indian winning a (silver) medal in a sporting event like the 3000m steeplechase, something that has long been considered the monopoly of Kenyans! Army man Avinash Sable has done the impossible with a new national record to reveal to the nation that the country has big hearts like him.

The Commonwealth Games may not be on par with the Olympics or even the Asian Games. It can’t be without big performers like the USA, Russia or China, for example, but a long-running event still provides a forum for athletes to test their wares on an international value scale. Someone like Neeraj would have loved to perform here. As well as being the defending champion, he added some precious jewels to his crown and Birmingham would have given him the perfect setting to display his class again. An injury stopped him or was it providence! The way his Pakistani friend and rival Arshad Nadeem won gold with a swell of over 90m, things couldn’t have been easy considering Neeraj’s best never cleared the 90m until now ! But that’s a different story.

Like Sable, what impressed was how most of the medals were won, thanks to that rare touch of fixity of purpose backed by hard work and hope. Take, for example, Sharath Kamal, the 40-year-old table tennis veteran, was still brimming with the kind of confidence and courage that must have been a great inspiration to his teammates. Three gold medals were his rewards for his outstanding show. Talking about aspirations and the story of weightlifter Sanket Sagar can be moving. Un, who sold paan and lived in humble circumstances, always dreamed big, and CWG showed him the way with a stellar performance (Silver Medal) that will surely change his world for good! Similar is the story of another gold medalist weightlifter Achinta Sheuli.

While new names exploded, there were established ones like badminton star and big winner PV Sindhu again proving his mettle and with Lakshya Sen and the pair of doubles of Satwiksairaj Rankireddy and Chirag Shetty giving the sport a golden hue . It is such successes that give new hope and direction to Indian sports in general.

Tata Steel Chess will hold a women’s event for the first time : The Tribune India

Tata Steel Chess will hold a women’s event for the first time : The Tribune…