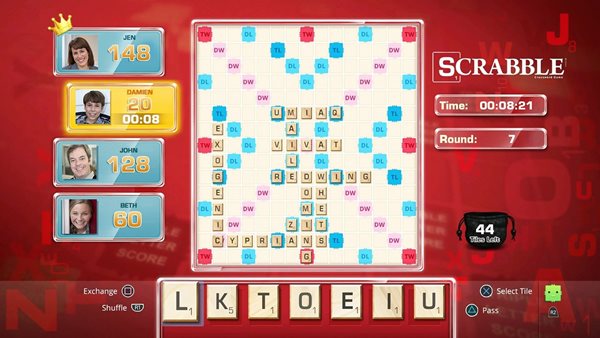 Scrabble Review for PS4, Xbox One

Conservatively, I’d say I’ve played a few thousand games of Scrabble in my lifetime. I got hooked from a young age (playing against parents and grandparents who never let me win), and it’s been a constant in my life ever since. Board game, video game, online version, whatever; I’ve always enjoyed playing it, to the point that it probably affects how my brain works. To this day, I can’t look at a license plate without instinctively trying to form words using the available letters.

In other words, I love Scrabble, which means I greeted the game‘s arrival on PS4 and Xbox One with quite a bit of excitement… but also a bit of trepidation. I still remember the complete and utter disaster that the current version of Monopoly was, which means I went into this new version of Scrabble a little worried that it, too, had somehow been ruined. It was a vague, shapeless fear, of course (because how can you ruin Scrabble?), but it was a fear nonetheless — after all, you wouldn’t think Monopoly could be ruined either, but this terrible Xbox One version showed anything was possible.

Turns out I had nothing to worry about. Scrabble came to the PS4 pretty much exactly as you remember it. There are no crazy bells and whistles, no silly gimmicks: it’s just you, your opponent, 100 tiles and a 15×15 board. If you’ve played the original version before, you’ll have no trouble getting used to the PS4 version.

I mean, you can customize things a bit, if you want. You can play with up to four players, for example, and you can also set time limits for rounds and the game as a whole. You can also play against an AI that ranges in difficulty from incredibly easy (which is actually hard, since all the really easy AI does is put in 2-3 letter words) to incredibly hard (a level of difficulty which is not for the faint-hearted).

This last point is in fact of crucial importance, since if the game has a fault, it is that online is completely dead. I tried to find someone to play with several times, and never met a single other person. Considering that Scrabble is meant to be a social game – or, at least, a game in which you dominate your superior vocabulary over other real, living people – not being able to play against someone else kind of dampened my enthusiasm for the game.

It didn’t kill him, however. Not by far. After all, even Scrabble against the AI ​​is still Scrabble. It might not be flashy or sexy, but on PS4 – like everywhere else it’s ever appeared – it’s still outstanding.