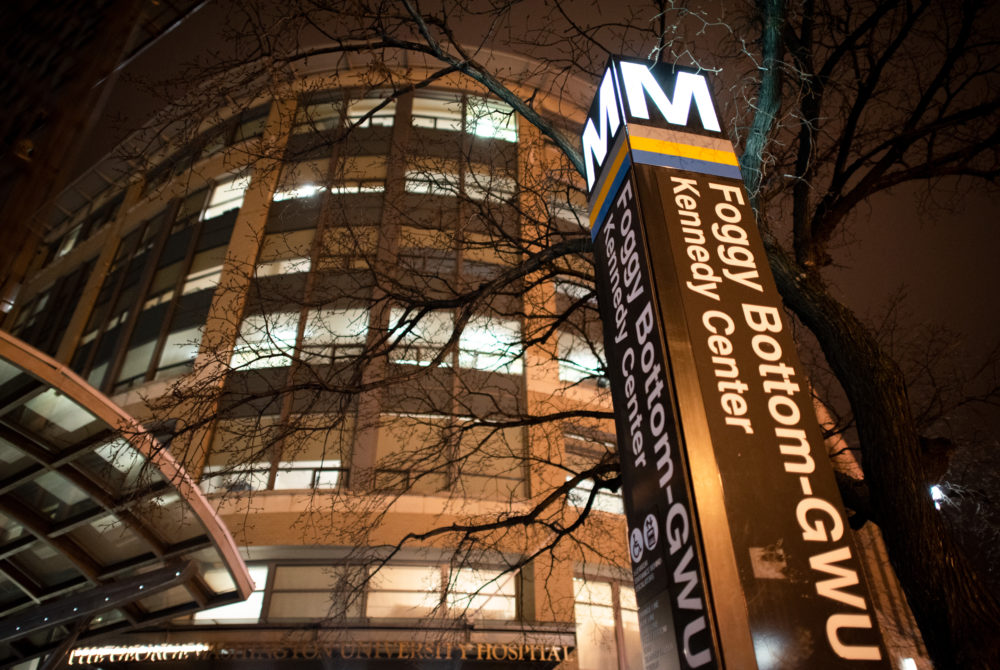 Listen to and take a look at the sights and sounds of the Blue Line metro stops.

We hiked the blue line from Foggy Bottom to Federal Triangle to capture some of the sights and sounds along the way. Here are the highlights:

Those who use Farragut West underground station are particularly dressed in business casual attire. Surrounding restaurants include Starbucks, Pret A Manger, Au Bon Pain, and the International Square Food Court, which sells fast food items like pizza, burritos, and burgers. People can be seen quietly eating outside in work clothes, possibly on a lunch or dinner break with colleagues. Rental offices, government buildings, and banks line the street in front of the stop.

McPherson Square subway station welcomes people from all walks of life. Some people appear to be students, while others are dressed in blazers and button down shirts. A mural depicting veterans covers the walls of the upper level of the station, which is connected to the Veterans Affairs building. Street vendors sell essential oils and snacks like muffins, crisps and cookies.

The Metro Center station appeared to be the largest and busiest station with giant advertisements plastered inside the station. Stores above the station include Ann Taylor and Macy’s, and vendors outside the station sell Street Sense newspapers and roses. Casual restaurants like Panera Bread and Au Bon Pain surround the station.

Federal Triangle is located near buildings like the Environmental Protection Agency and the old US Post building. On the lawn in front of the EPA building, a group of protesters called “Environment America” ​​carried signs saying “Wrong Way On Clean Cars” and chanted “What do we want?” Clean cars! When do we want it? Now! ”Other notable sites include a full bike rack for federal employees, an international food court across the street, and security guards.

This article appeared in the October 3, 2019 issue of Hatchet.

World No. 1 in Scrabble: Malaysian Ganesh Asirvatham on his love of the game

Out of the blue: Snakes and Ladders, Monopoly and Cluedo