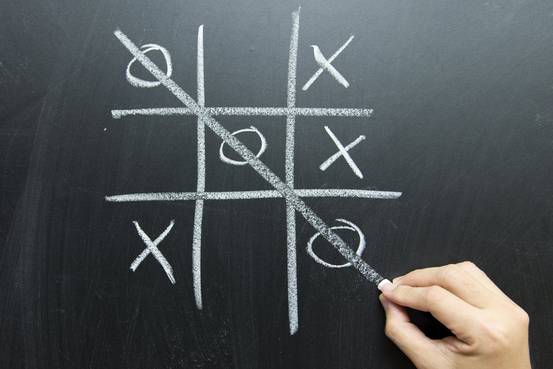 The virtues of a simple tic-tac-toe

Here’s a paradox: Some of the most popular and enduring games of all time get the least respect from serious gaming enthusiasts.

Consider a list from BoardGameGeek, whose members have cast millions of votes and ranked nearly 12,000 games. The lowest rated is the tic-tac-toe, followed by Chutes and Ladders, Bingo, War, and Candy Land. Parcheesi (19th worst) and Checkers (38th worst) are two of the oldest games people still play, having survived in various forms for at least 1,000 years. These games must have something going for them.

So what are geeks missing? Games are becoming popular for different reasons. Simplicity is one: playing Chutes and Ladders or Candy Land accustoms a child to taking turns, following rules and, if not the thrill of victory, certainly the agony of defeat. Of course, these games are completely random, making them non-starters for serious enthusiasts.

Tic-tac-toe adds a lesson in the importance of decision making and consequences – one wrong move and you lose. Its brevity makes it a perfect vehicle to illustrate the advantages of anticipating and taking into account the strategy of the opponent. And War introduces children to playing cards and their ranks, opening up a cornucopia of future games.

Things get more interesting when we reach the ninth game from the bottom: Monopoly, which has been around for over a century. Monopoly is neither simple nor random; it has several pages of rules and is full of social interactions and consequent decisions regarding the purchase, collection, exchange and management of resources (property and money). These same features are at the heart of modern top rated games. For its pioneering role in game design, pundits should love Monopoly, but they hate it.

How to win the tic-tac-toe every time

Pacheco hits back at Dem’s criticism

Can you win the blindfolded tic-tac-toe?